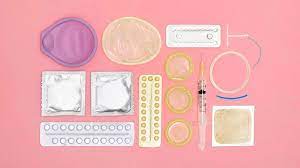 Knowing The Right Type of Contraceptives That Will Work For You

What are the types of birth control?

Abstinence is the only birth control method that is 100 percent successful, as well as the best way to avoid STDs. If you don't feel ready, don't allow someone pressure you into having sex. It's a big decision with a lot of emotional and physical ramifications.

Tubal ligation is a surgical procedure that ties a woman's tubes (fallopian tubes). This prevents the egg (ovum) from reaching the uterus, resulting in permanent infertility. This also prevents sperm from passing up the tube to the ovulating ovary, where fertilization normally takes place.

A vasectomy is a quick and painless treatment that permanently sterilizes men. The vas deferens, or sperm-carrying tubes in the male reproductive system, are cut and sealed during the procedure, which is normally performed in a doctor's office. The transport of sperm out of the testes is prevented by a vasectomy. The man's capacity to orgasm or ejaculate is unaffected by the operation (potency). Although there will be a flowing ejaculate, there will be no sperm in it. Vasectomy has been found in studies to improve couples' sexual satisfaction.

It is a single hormone rod (about the size of a matchstick) that a doctor places beneath the skin of the upper arm. Over a three-year period, it provides a progestin hormone (no estrogen).

An intrauterine device (IUD) is a T-shaped, tiny device that is inserted into the uterus (womb). IUDs are divided into two categories:

-A copper IUD is a type of intrauterine device.

These IUDs function by thickening the cervical mucus, preventing sperm from reaching the egg. The hormone also thins the uterine lining, resulting in lighter monthly bleeding.

Includes estrogen containing birth control pills, the vaginal ring, and patch. The pill, patch and ring are medications that women take to prevent pregnancy. The pill is taken daily, the vaginal ring is used once a month, and the patch is changed weekly.

These are pills that contain only one hormone (progestin). They work by thickening the cervical mucus so the sperm cannot reach the egg. The hormone in the pills also thins the lining of the uterus, so menstrual bleeding is lightened. A pill is taken every day with no placebo (break).

It is is a form of birth control that may be used by women within 120 hours (five days) of having unprotected sex. This may be necessary in the case of contraceptive failure (broken condom), rape, or any other situation where highly effective contraception was not available. It is most effective when taken soon after unprotected intercourse. A copper IUD is the most effective form of emergency contraception, and also provides ongoing birth control. There are two types of emergency contraceptive pills available.

A male condom, sometimes known as a "rubber," is a thin latex, plastic, or animal membrane covering that is rolled over an erect penis. Semen, the fluid containing sperm, is prevented from entering a woman's vaginal canal by the covering. The majority of people choose latex condoms. If you or your partner have a latex allergy, you should use plastic condoms. Animal-skin condoms may not offer adequate protection against sexually transmitted illnesses (STDs).

Diaphragm is a flexible rubber cylinder with a hard rim. The diaphragm is inserted into the woman's vagina and pressed on her cervix. Semen cannot enter the womb because of the diaphragm. A diaphragm is required while using spermicide.

The cervical cap is a thimble-shaped cup that fits firmly over the cervix and is made of plastic or soft rubber. It functions similarly to a diaphragm. Before sex, the lady fills the cup in spermicide and places the cap in her vagina and up to her cervix. The spermicide paralyzes the sperm and the cap seals the cervix. Each time you have sex, more spermicide must be put into the vaginal canal. (Don't take the cap off every time you have sex.)

The female condom is a flexible ring at each end of a lubricated polyurethane (plastic) tube. The tube is closed on one end. The lady inserts the condom into her vagina such that the closed end of the tube covers the cervix and the other end gently covers the labia before sexual activity begins (lips on the outside of the vagina). Sperm cannot enter the womb because of the condom.

The sponge is a tiny, donut-shaped device with spermicide coating. The sponge is wetted and put into the vaginal canal. It's comprised of polyurethane foam, which mimics the feel of natural vaginal tissue. The sponge works in three ways to prevent pregnancy:

A woman practices rhythm, or natural family planning, by learning to recognize her reproductive days and then abstaining from sex on those days. Keeping track of variations in body temperature and vaginal discharge is one method (fluid from the vagina.)

ABOUT THE AUTHOR
Anh is a Psychology intern at the Thaddeus Resource Center, Agape House. She studied Psychology at San Jose State University and is currently working towards MFT licensure. She wants to help couples with their marriages and relationship issues. She enjoys movies and travelling